For the latest news on legislation visit our Newsworthy Section.

COMMENTS
We presented joint opposition testimony with five other organizations on December 11th in the Senate General Government and
Agency Review Committee. We had been getting feedback from the Senators on the committee that the bill might not move, but
there have been four hearings in the committee so it could be that some version of the bill will pass. Committee members have asked
questions during the hearings as to whether there could be some modernization of ballot language by changing the following
phrase:  "expressed in cents or dollars and cents for each one hundred dollars"

The point being the term "hundred" could be changed to "thousand."

Attorney Becky Princehorn from Bricker and Eckler who testified in the hearing on January 22nd, indicated to the committee that such
a change was unnecessary.

COMMENTS
This bill is patterned about legislation supported by the Sandy Hook Promise non-profit organization. It continues to be considered
by the Senate Education Committee with a fifth hearing this morning. There are a number of new requirements districts would need
to follow, including the formation of threat assessment teams in each building. The teams would need to receive training and they
would be charged with developing a threat assessment document that would be included in the emergency management plan. The
bill also requires schools to have a student-based club that focuses on suicide prevention and safety threat prevention.


HB305 SCHOOL FINANCING (CUPP B, PATTERSON J)
To create a new school financing system, and to make an appropriation.

COMMENTS
There are components of the proposed formula in the Cupp/Patterson bill that still have not had hearings in the House Finance
Committee. We expect hearings in the coming weeks. Bill sponsors Cupp and Patterson have been looking at possible changes to the
legislation in response to feedback from stakeholders. Speaker Householder has also talked about making changes to assist the
school districts from his part of the state, but the EdChoice issues have likely been his focus in recent weeks, particularly since the
legislature returned from the holiday break. We will keep members updated once details of possible changes to the bill become
available.


SB89 CAREER-TECHNICAL EDUCATION (HUFFMAN M)
With regard to career-technical education and the compensation of joint vocational school districts located in enterprise zones.

COMMENTS
This bill has been used by the House to propose changes to the EdChoice voucher program, phasing out the district-paid, building
performance-based program. New vouchers going forward would be income-based and paid for directly by the state. The income
threshold would be raised to 250% of the Federal poverty level (up from the current 200%).
Other provisions added to the bill were the elimination of the three current Academic Distress Commissions and the sunset of the law
adopted last spring in the budget bill that allows township residents to vote to move from one district to another.


SB212 AUTHORIZE TOWNSHIPS-EXEMPT PROPERTY TAX (SCHURING K)
To authorize townships and municipal corporations to designate areas within which new homes and improvements to existing homes
are wholly or partially exempted from property taxation.

COMMENTS
This tax exemption would be for residential developments. The same provisions for school board involvement as with other tax
exemptions (the board has to approve anything over 75% of the tax loss and anything past 10 years in length).

SB244 CERTIFICATES OF TRANSITION (RULLI M)
To require fiscal officers of certain political subdivisions to provide certificates of transition to their successors when leaving office.

COMMENTS
This bill was introduced at the request of State Auditor Keith Faber. We were asked to provide feedback on the first version of the
proposal, and changes were made after we submitted our input and before the bill was introduced. The bill is improved over the
original version, but the members (from the OASBO AOS and Legislative Committees) who have responded to our request for
feedback on the bill, indicates there are still concerns.

School treasurers are already required by law to turn over information, etc., when they leave office. SB 244 makes reference to that
statute for school treasurers as we had suggested, but still adds a new requirement for a Certificate of Transition.

One point of interest is regarding that statute from current law. It still refers to the treasurer needing to turn over information related
to teachers. Since we no longer possess those records, we have indicated to the AOS that the section needs to be amended. The AOS
agrees and his staff has talked to legislators about removing the reference.

HB 450 is a similar bill that was introduced in the House in December. It was recently assigned to the House State and Local Government Committee. Sponsor testimony was presented on February 12th.

Click here to view all the bills OASBO is monitoring. 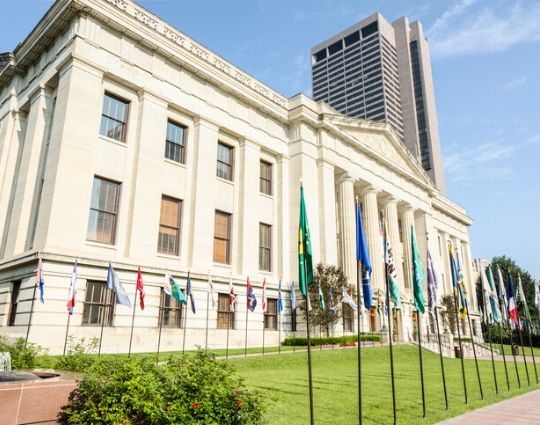